Is Surrogacy Legal in Arkansas? 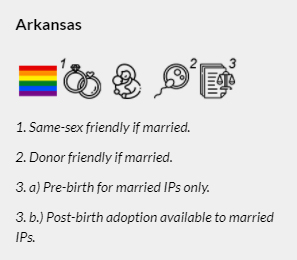 Are There Surrogate Requirements in Arkansas?

No specific legal requirements exist to serve as a gestational surrogate in the state of Arkansas.

For pre-birth orders, the conditions under which intended parents can be declared legal parents if at least one parent is genetically related to the child are listed below:

*Only the biological parent can obtain the pre-birth order, through a two-step process. The other parent would have to acquire a second parent adoption outside the state of Arkansas.

For pre-birth orders, the conditions under which intended parents can be declared legal parents if neither parent is genetically related to the child are listed below:

Whose names go on the birth certificate in Arkansas?

Arkansas requires by statute that the initial birth certificate will name the surrogate but that pursuant to a pre-birth or post-birth order, a substituted certificate of birth will be issued removing or replacing the Surrogate’s name.

Same-sex parents are named on birth certificates as “parent and parent.”

An international same-sex male couple can obtain an initial birth certificate naming the biological father and the gestational surrogate as parents.  In this instance, the second father would have to obtain a second parent adoption outside of the state if the couple is not married; Arkansas would then amend and reissue a birth certificate with the two fathers named.  This cannot be circumvented solely on the basis of a child’s birth in Arkansas.

Same sex couples are treated the same as heterosexual couples.

Are There Options for Unmarried Intended Parents in the state of Arkansas?

The biological parent if only one of them is biologically related would go on the birth certificate and they would have to complete a second parent adoption outside the state of Arkansas. Arkansas does not have a method of doing second parent adoptions for unmarried couples. If both intended parents are biologically related they could seek a finding of paternity and maternity (with heterosexual couples) and be declared joint custodians.

There is no legal precedent in Arkansas that clearly defines the rights to donated eggs or sperm involved in a surrogacy arrangement.

Do you have questions about surrogacy law in your state? ​
Download the US Surrogacy Map

Listen Now
Stay In The Loop