Is Surrogacy Legal in Colorado?

In Colorado, there is no established law regarding gestational surrogacy. Historically, courts have ruled favorably for intended parents whether married or not, single or partnered, same sex or hetero, and whether a child is born via donated egg, sperm or embryos.

Similarly, traditional (genetic) surrogacy in Colorado is permitted; no existing statute or case law prohibits it. 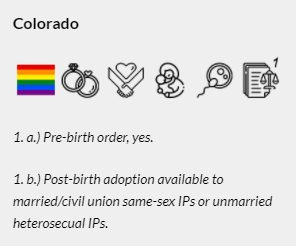 Are There Surrogate Requirements in Colorado?

No specific legal requirements exist to serve as a gestational surrogate in the state of Colorado.

Parentage Orders: Pre-birth orders determinative of parentage are typically granted to intended parents. Post-birth orders might be recommended by the home country ART attorney or other attorney to affirm relinquishment of the child and to affirm non-parentage of the surrogate and her spouse. ART attorneys in Colorado prepare documents to petition the court for a determination of parentage beginning at or around 16-18 weeks of fetal gestational age.

For pre-birth orders and post-birth orders, the conditions under which intended parents can be declared legal parents are listed below:

For pre-birth orders and post-birth orders, the conditions under which intended parents can be declared legal parents if neither parent is genetically related to the child are listed below:

Parental presumption is the concept that when a married woman gives birth, her spouse is the child’s other legal parent. In Colorado, the parental presumption applies to create presumptive legal rights to a child for the spouse of the woman giving birth, whether the couple is same-sex or heterosexual. Colorado law states that a man is presumed to be the “natural father” of a child if he receives the child into his household and openly holds the child out as his natural child, if he and the child’s mother are married when the child is born or if the child is born within 300 days after the marriage is terminated, or if the child is the product of assisted reproduction. Colorado’s law has not been updated since the recognition of marriage equality and still uses gender-specific language, but the statutes explicitly allow for declarations of Maternity and for “Father” to mean “Mother” as appropriate and, further, Colorado courts have held that these “parental presumptions” apply equally to married same-sex couples.

A “step-parent adoption” is the legal adoption of a child by the spouse or partner of a child’s custodial legal parent. In Colorado, same-sex spouses or partners who are married or joined in a civil union may petition to adopt their spouse/partner’s child as a stepparent. The child’s custodial parent must consent to the adoption and any other non-custodial parent must have relinquished the parent-child relationship voluntarily or through court order. A home study is not typically required.

Whose names go on the birth certificate in Colorado?

Intended parents can choose the designation under which they are named on their child’s birth certificate as “mother and mother,” “father and father,” “parent and parent,” or “mother and parent.”

A Colorado ART attorney will typically communicate with the intended parents’ country of citizenship’s (“home country”) ART attorney or other attorney to determine how the birth certificate should be prepared as it relates to recognition of parentage and/or to recognition of citizenship of the child. In view of this, international intended parents might obtain an initial birth certificate naming the biological father and the gestational surrogate as parents as determined by the intended parents’ home country attorney. The intended parents can subsequently obtain an amended birth certificate in Colorado naming both fathers/both parents as the parents. A second-parent or step-parent adoption might be recommended by the home country attorney. Such adoptions are done while the child is still within the state and the non-biological parent must have established residency in the state. Venue may be based on the county of the child’s birth.
ART attorneys understand that birth certificates are only “administrative” in nature and are not determinative of parentage. Because some states have refused to recognize birth certificates from other states, same-sex parents should always obtain a court order defining their legal status as parents. This can be accomplished by petitioning a court for a pre-birth order determining parentage, by petitioning a court for a declaration of paternity or maternity, or by obtaining an adoption decree.

Are There Options for Unmarried Intended Parents in the state of Colorado?

Colorado Revised Statutes §19-4-106 applies to both sperm and egg donation used in assisted conception by a husband and wife and gives the intended parents the designation of mother or father; the donor does not retain parental rights.