Is Surrogacy Legal in Florida?

In Florida, gestational surrogacy is permitted by Section 742.15, Fla. Stat. Gestational Surrogacy Agreements are only permitted if the Intended Parents are a married couple with one member of the couple being genetically related to the child. Other intended parents (such as single people or unmarried couples) can participate in surrogacy in Florida, through the execution of a Preplanned Adoption Agreement. Preplanned Adoption Agreements are similar to Gestational Surrogacy Agreements, but there are certain nuances and differences.

Traditional (genetic) surrogacy in Florida is also permitted in the form of a Preplanned Adoption Agreement from a “volunteer mother.” Unlike gestational surrogacy, these sorts of agreements are permitted for intended parents of all marital statuses. However, a traditional surrogate’s consent is revocable for up to 48 hours after birth, due to her genetic connection to the child. 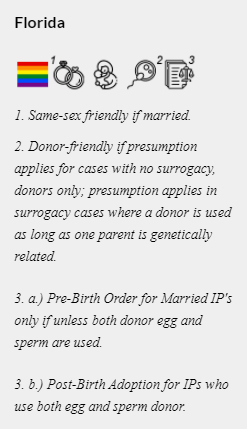 Are There Surrogate Requirements in Florida?

No specific legal requirements exist to serve as a gestational surrogate in the state of Florida.

Parentage Orders: Pre-birth orders that require that the hospital place the Intended Parents’ names on the birth certificate are not generally granted to intended parents in Florida. Vital Statistics does not list intended parents on a birth certificate until after a child is born and a Final Judgment of Affirmation of Parental Status is entered by the Court and provided to Vital Statistics by Intended Parents’ attorney. Occasionally, interim pre-birth orders are issued to allow intended parents to make medical decisions for a child.

For pre-birth orders, the conditions under which intended parents can be declared legal parents if at least one parent is genetically related to the child are listed below. Please note these pre-birth orders will not get the Intended Parents’ names on the birth record at birth, and a post-birth process must be followed in order for the birth record to be amended:

*If interested in surrogacy in Florida, these intended parents should consider a pre-planned adoption under Chapter 63

For pre-birth orders, the conditions under which intended parents can be declared legal parents if neither parent is genetically related to the child are listed below. Please note these pre-birth orders will not get the Intended Parents’ names on the birth record at birth, and a post-birth process must be followed in order for the birth record to be amended:

Whose names go on the birth certificate in Florida?

Currently, the Florida Bureau of Vital Statistics requires an initial birth certificate application be completed by the hospital immediately following the child’s birth, which lists the surrogate as the child’s birth mother. However, it should also include the name of the intended parents. Upon entering the Final Order affirming parental status, the court will direct the Florida Bureau of Vital Statistics to amend the child’s birth certificate and the birth record to list the intended parents as the mother/parent and father/parent of the child. At this point, all surrogate’s information will be deleted from the birth record and a birth certificate will immediately be issued, which usually takes about three weeks to process. Same-sex couples will be named as “mother/parent” and “father/parent.”

Are There Options for Unmarried Intended Parents in the state of Florida?

Florida surrogacy laws permit singles and unmarried couples to form a Pre-Planned Adoption Agreement, governed by Florida Statute 63.213. It is similar to a gestational surrogacy contract but is handled under different Florida laws. Additionally, the court proceeding to remove the surrogate as the legal parent and name the intended parents as the legal parents takes place after the child’s birth.

Ch.742.14 FL Stat. governs the donation of eggs, sperm, and pre-embryos, and states that once a donor donates, the donor has no parental rights or interest over the donated gametes, or any child born from the donation.