Is Surrogacy Legal in Alaska?

Similarly, the courts are favorable toward traditional (genetic) surrogacy in Alaska; again, no statute or published case law prohibits it. 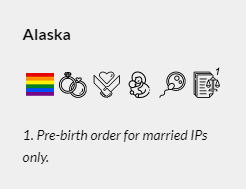 Are There Surrogate Requirements in Alaska?

No explicit requirements exist to serve as a gestational surrogate in the state of Alaska.

Parentage Orders: Post-birth adoptions are common in Alaska. Pre-birth orders are only granted under extremely specific conditions, so the counsel below is provided for post-birth orders.

For post-birth orders, the conditions under which intended parents can be declared legal parents if at least one parent is genetically related to the child are listed below:

*It is likely they could be declared legal parents, but currently no precedent exists.

For post-birth orders, the conditions under which intended parents can be declared legal parents if neither parent is genetically related to the child are listed below:

Whose names go on the birth certificate in Alaska?

Are There Options for Unmarried Intended Parents in the state of Alaska?

There is no legal precedent in Alaska that clearly defines the rights to donated eggs or sperm involved in a surrogacy arrangement.

Do you have questions about surrogacy law in your state? ​
Download the US Surrogacy Map

Listen Now
Stay In The Loop