Is Surrogacy Legal in Hawaii?

In Hawaii,gestational surrogacyis permitted because there are no statutes or prior case law which prohibit it.

Traditional (genetic) surrogacy in Hawaii is legally unclear and should be embarked upon with caution or an expectation to evaluate the issue in court.

In either case, courts have been generally favorable toward Intended Parents who choose to embark upon the practice in Hawaii. However, elements of the law can vary across the state and may depend on the Family Court judge in your Circuit (i.e. your island). For example, a judge in Honolulu may render a different result from a judge in Hilo. Court processing times also vary between courts on different islands.  We strongly recommend retaining legal counsel who is knowledgeable of reproductive law in Hawaii. 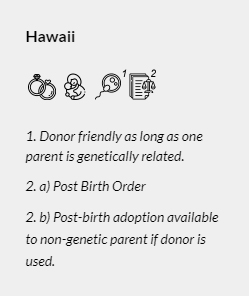 Are There Surrogate Requirements in Hawaii?

Currently, there are no specific legal requirements for an individual to serve as a gestational surrogate in the state of Hawaii.

Parentage Orders: No, Hawaii courts do not grant pre-birth orders regarding parentage. Intended Parents wishing to be declared the legal parents of a child born of surrogacy, must do so after the child is born (post-birth).

For post-birth orders, where at least one parent is genetically related to the child, Intended Parents may be declared legal parents under the following conditions:

For post-birth orders, where neither parent is genetically related to the child, Intended Parents may be declared legal parents through an adoption proceeding:

Whose names go on the birth certificate in Hawaii?

Non-biological parents are also able to obtain a parental designation through a second or step-parent adoption proceeding.

Are There Options for Unmarried Intended Parents in the state of Hawaii?

Yes. Marriage is not a requirement for an Intended Parent to obtain an order of legal parentage of a child born through a gestational surrogate.

As with surrogacy as a whole, Hawaii has no laws or applicable legal precedents which govern sperm or egg donations. Your assisted reproductive technology attorney will be able to draft your egg or sperm donor agreement.