Is Surrogacy Legal in Texas?

Traditional (genetic) surrogacy in Texas requires a termination of parental rights, the establishment of paternity and/or an adoption. Everything is filed after the child is born. 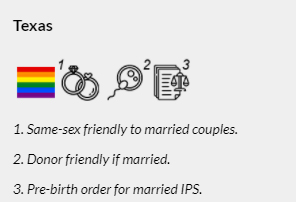 Are There Surrogate Requirements in Texas?

No specific legal requirements exist to serve as a gestational surrogate in the state of Texas.

Parentage Orders: Courts in Texas do grant pre-birth orders, as long as it is done in compliance with the statutory validation procedure.

The conditions under which intended parents could be declared legal parents with a pre-birth order are listed below:

*Some courts may allow, even though the statute specifically references a married couple.

*Some courts may allow
°Yes, if married

Whose names go on the birth certificate in Texas?

An international same-sex male couple can obtain a birth certificate listing the biological father and gestational surrogate as parents; however, the Intended Parents would not be named as parents of the child pre-birth.  This protocol would require a post-birth parentage action, and in some jurisdictions, a subsequent adoption.  A later amended version can list the two fathers as the legal parents. It can be expedited by the child being born in state, if the parents are married.

Same-Sex couples are treated exactly the same as heterosexual couples.

Are There Options for Unmarried Intended Parents in the state of Texas?

If a heterosexual couple was using their own gametes, then a termination of the gestational surrogate’s parental rights and a post-birth parentage Order could establish parentage.

If not using their own gametes, then a termination of the gestational surrogate’s parental rights and a post-birth parentage Order and Adoption Order could establish parentage.

Tex. Fam. Code§ 160.702 absolves egg or sperm donors of parental rights, stating,  “A donor is not a parent of a child conceived by means of assisted reproduction.”